Bear it or perish. Those are the words Helen Jean hears that fateful night in her cousin's outhouse that change the trajectory of her life.

Spanning decades, "Perish" tracks the choices Helen Jean-the matriarch of the Turner family-makes and the ways those choices have rippled across generations, from her children to her grandchildren and beyond.

Told in alternating chapters that follow four members of the Turner family: Julie B., a woman who regrets her wasted youth and the time spent under Helen Jean's thumb; Alex, a police officer grappling with a dark and twisted past; Jan, a mother of two, who yearns to go to school and leave Jerusalem, Texas, and all of its trauma behind for good; and Lydia, a woman whose marriage is falling apart because her body can]t seem to stay pregnant, as they're called home to say goodbye to their mother and grandmother.

This family's 'reunion' unearths long-kept secrets and forces each member to ask themselves important questions about who is deserving of forgiveness and who bears the cross of blame.

Tackling themes like family, trauma, legacy, home, class, race, and more, this beautiful yet heart-wrenching novel, will appeal to anyone who is interested in the intricacies of family and the ways bonds can be made, maintained, or irrevocably broken.

LaToya Watkins 's writing has appeared in "A Public Space ", "The Sun" , "McSweeney's" "The Kenyon Review" , "The Pushcart Prize XXXIX" (2015), and elsewhere. She has received grants, scholarships, and fellowships from the Middlebury Bread Loaf Writers' Conference, the MacDowell Colony, Yaddo, Hedgebrook, and A Public Space (she was one of their 2018 emerging writers fellows). She holds a PhD from the University of Texas at Dallas. Perish is her debut novel. 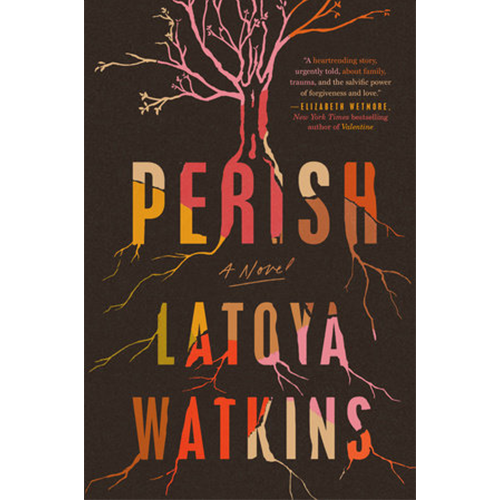