A lost young woman returns to small-town New Hampshire under the strangest of circumstances in this one-of-a-kind novel of life, death, and whatever comes after from the acclaimed author of "Rabbit Cake".

It was a source of entertainment at Maple Street Cemetery. Both funny and sad, the kind of story we like best.

Natural-born healer Emma Starling once had big plans for her life, but she's lost her way. A med-school dropout, she's come back to small-town Everton, New Hampshire, to care for her father, dying from a mysterious brain disease. Clive Starling has been hallucinating small animals, as well as visions of the ghost of a long-dead naturalist, Ernest Harold Baynes, once known for letting wild animals live in his house. This ghost has been giving Clive some ideas on how to spend his final days.

Emma arrives home knowing she must face her dad's illness, her mom's judgement, and her younger brother's recent stint in rehab, but she's unprepared to find that her former best friend from high school is missing, with no one bothering to look for her. The police say they don't spend much time looking for drug addicts. Emma's dad is the only one convinced the young woman might still be alive, and Emma is hopeful he could be right. Someone should look for her, at least. Emma isn't really trying to be a hero - but somehow she and her father set in motion just the kind of miracle the town needs.

Set against the backdrop of a small town in the throes of a very real opioid crisis, "Unlikely Animals" is a tragicomic novel about familial expectations, imperfect friendships, and the possibility of resurrecting that which had been thought irrevocably lost.

Annie Hartnett is the author of novels "Rabbit Cake" and "Unlikely Animals."

Unlikely Animals was the April 2022 book club selection for "Good Housekeeping" magazine and Amerie's Book club. It received starred reviews from "Booklist" and "Bookpage", and was an April Indie Next pick.

"Rabbit Cake" was listed as one of "Kirkus Reviews'" Best Books of 2017, was a finalist for the New England Book Award, an Indies Introduce and an Indie Next Pick, and was long-listed for the Center for Fiction's First Novel Prize. It received starred reviews from "Publisher's Weekly", "Kirkus", and "Library Journal", and was "People" magazine's Book of the Week. It is currently under option with Amazon Studios.

Annie has been awarded fellowships and residencies from the MacDowell Colony, Sewanee Writers' Conference, and the Associates of the Boston Public Library. She holds degrees from the MFA program at the University of Alabama, Middlebury College's Bread Loaf School of English, and Hamilton College. She lives in Massachusetts with her husband, daughter, and dog. 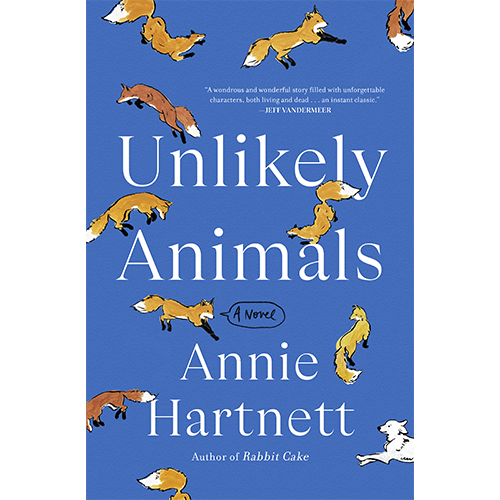